Epic Games’ Fortnite has definitely revolutionized the multiplayer FPS genre by mixing survival, crafting and tower defense gameplay elements together to give players a never seen before experience. If there was one thing that was lacking, it was a PvP mode where players could face each others. Players asked for it, and Epic Games delivered with Fortnite Battle Royale.

For the better or for the worse, however, this triggered a number of heated debates due to the similarities between Fortnite Battle Royale and the extremely popular PLAYERUNKNOWN’S BATTLEGROUNDS (PUBG), with the developers behind the latter even pointing out their disappointment at what they believe to be Epic Games simply and plainly ripping off their game.

Like with everything else, opinions are extremely diverging and had divided the community between those that believe Epic Games definitely copied the main features of PUBG and those that do not think they are similar enough to warrant Bluehole, Inc.’s claims/accusations (as well as another part of the community that simply doesn’t care).

So here are my thoughts on the matter!

The start of a match is also by far the most obvious similarity between the two games. In both games, players start in a lobby where they wait to be sent onto the map. In this lobby, while they can find and use weapons to attack other players, but cannot actually damage them.

Once the timer runs out, players are sent over the main map, and spawn on a plane in PUBG, and a signature flying bus in Fortnite Battle Royale. From then on, they decide where they want to drop, and skydive towards the area of their choice. Whenever they decide to, or when they get close enough to the ground, a parachute (in PUBG) and a glider (in Fortnite Battle Royale) is triggered to allow a slow and soft landing. This allows the players enough time to move around and pick their landing area. If there are too many players around a specific building, for example, they can simply move to another.

As for the second (and I believe, the last) blatant similarity between the two games, it is the way the maps work. At the start of the match, players are free to go anywhere over the map, which is rather large (somewhat larger in PUBG). As time goes on, however, players are forced to move within a circle on the map to avoid elimination. This serves the purpose of restricting the area in which players can fight late in the match, and also reduce the time it will take for a match to end.

Up to this point, and only considering these aspects, I can agree that the similarities are too obvious for this to be a coincidence.

But this changes as soon as the match itself starts.

PLAYERUNKNOWN’S BATTLEGROUNDS has low restrictions when it comes to the number of items players can carry. It all depends on the level of the backpack the players have, with a Level 1 backpack having a hold capacity of 170, which can be increased further if the players find a utility belt. As such, they have more freedom in regards to what they can have on their character, being able to carry armor, weapons, ammo, different grenades, and other useful consumables.

In Fortnite Battle Royale, however, restrictions are way more strict and apparent. For starters, players are limited to 6 slots that can be used to store weapons and consumables, one of which is occupied by your pickaxe, leaving you down to 5 slots. For example, they can only have 3 weapons, one health potion and one armor battery. This greatly limits inventory management, and players are often forced to drop a weapon to use a loot consumable, before picking it up again. Paired with the fact that when looting, items are highlighted on the ground, with different colors depending on their rarity, players will spend much less time replacing their lower quality weapons, which can be both good and bad. On the other hand, there are barely any restrictions when it comes to the carry capacity of building materials and ammo.

The biggest difference between the two games, which can largely be attributed to the essence of the main Fortnite game, is the fact that PUBG does not feature any crafting element, while Fortnite Battle Royale does. Indeed, Epic Games’ title places a great focus on building structures, and the Battle Royale mode is no exception to this. 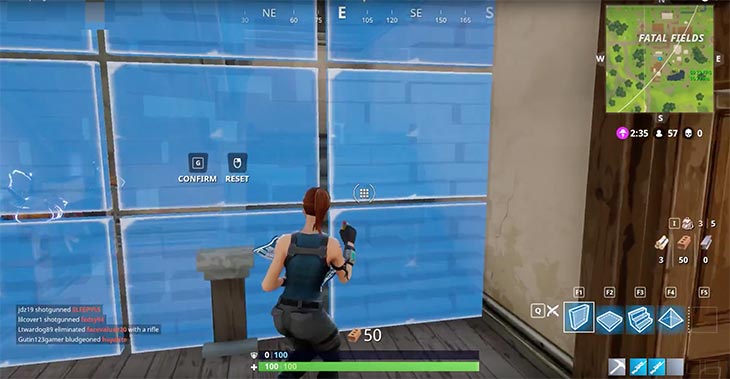 So yes, Fortnite Battle Royale makes the gameplay more interesting since players can create their own cover instead of depending on static ones, and can even create sniper platforms with various walls and traps to hinders enemies trying to climb them.

Another huge difference between the two is that Fortnite Battle Royale be called somewhat casual, at least when compared to PUBG. The weapons are extremely easy to use, and while some do possess some advantage (shotguns in close range and sniper rifles for long range), encounters between players remain somewhat balanced. Healing items are also available in limited numbers, which makes it hard for players to heal after every small skirmishes.

In PLAYERUNKNOWN’S BATTLEGROUNDS, however, things immediately get more complicated. Not only are they much harder to master, but they even require players to add various components found as loot to use them properly. These can, for example, improve the handling or accuracy, reduce recoil or noise, and even magazine sizes. Moreover, with players often carrying dozens of health recovery items at a time, they are less likely to push themselves in direct confrontations, preferring to take cover and heal if the situation allows it.

In lights of these facts, I honestly do not believe that Fortnite Battle Royale is similar enough to PLAYERUNKNOWN’S BATTLEGROUNDS to warrant the “rip off” claims. Granted, there are a few aspects that Epic Games admits have been inspired by PUBG, some might even rightfully say that they were blatantly copied. But isn’t that what game development is about? Taking features that work and adding your own twist to them?

So my answer is no, Fortnite Battle Royale did not plagiarise PUBG. Moreover, my personal opinion is that Bluehole, Inc. is only being vocal about the matter because Epic Games made their title Free to Play, which they might see as unfair competition.